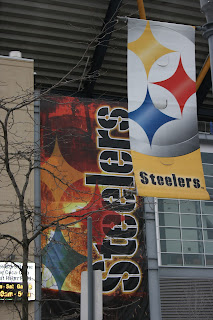 As you probably have heard by now, the Pittsburgh Steelers lost in the Super Bowl last night to the Green Bay Packers.The team didn't play well (giving up three turnovers which resulted in 21 points for the Pack). It's hard to overcome that, no matter what storied  history of big comebacks a team might have.

The fans here are completely committed to the Steelers and won't let this small bump in the road stop them from rooting for the team. The Terrible Towels will live to wave anotther day.

I wore my Steeler sweatshirt today as one last hurrah before we put them away till next season. There won't be a parade to attend in town this year, unfortunately, and we can no longer ignore February in Western PA. with all of its drabness. Sigh.

But the Pitt Panthers are still riding high and the Penguins are always  fun to watch, and a new season of Glee has started. . . Spring can't be too far behind.
Posted by Teri Flatley at 3:30 PM