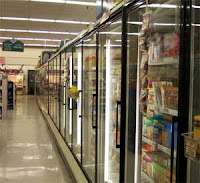 Yesterday, I visited one of the new mega grocery stores in the Pittsburgh area for the first time and was very impressed. The Giant Eagle Market District at Settlers Ridge is gigantic,with amenities I had never seen before in a store.

I live in the North Hills of Pittsburgh so rarely does my car find itself on the south end of the city, something we all laugh about but it's true. I saw a lot of neighborhoods for the very first time -- and I have lived here for a long time -- solely because of my sons' athletics. So for me to drive to this store in the southwestern section of Pittsburgh was a big deal.

But it was totally worth it. My friend and I spent several hours exploring the store, enjoying salads at the food court, and gelato for dessert on our way out. I had a short grocery list since I had been to the store earlier in the week, so we were free to mostly just look around, and drool.

I think these stores are fun and interesting, but I probably wouldn't want to do my regular food shopping there. Just too many choices. Sometimes -- most of the time, I like to run into a store and get back out as soon as possible, the quicker the better. So this excursion was more of an adventure than a necessity.

We did have fun though, and got a laugh out of the fact that of the short list of items I had with me to buy, the store was out of bags of shredded lettuce. A clerk checked in the back for me and found none. There must have been hundreds of other bags of lettuce around, but not the ones I wanted for today's Cinco de Mayo's Taco Night at our house.

Guess you can't have everything!

Note: For the first time ever, I saw Brussels sprouts growing on a stalk. I never really thought about how these little green orbs grew since I don't like them much, but it was neat to see where they came from. Love seeing new things!
Posted by Teri Flatley at 9:24 AM